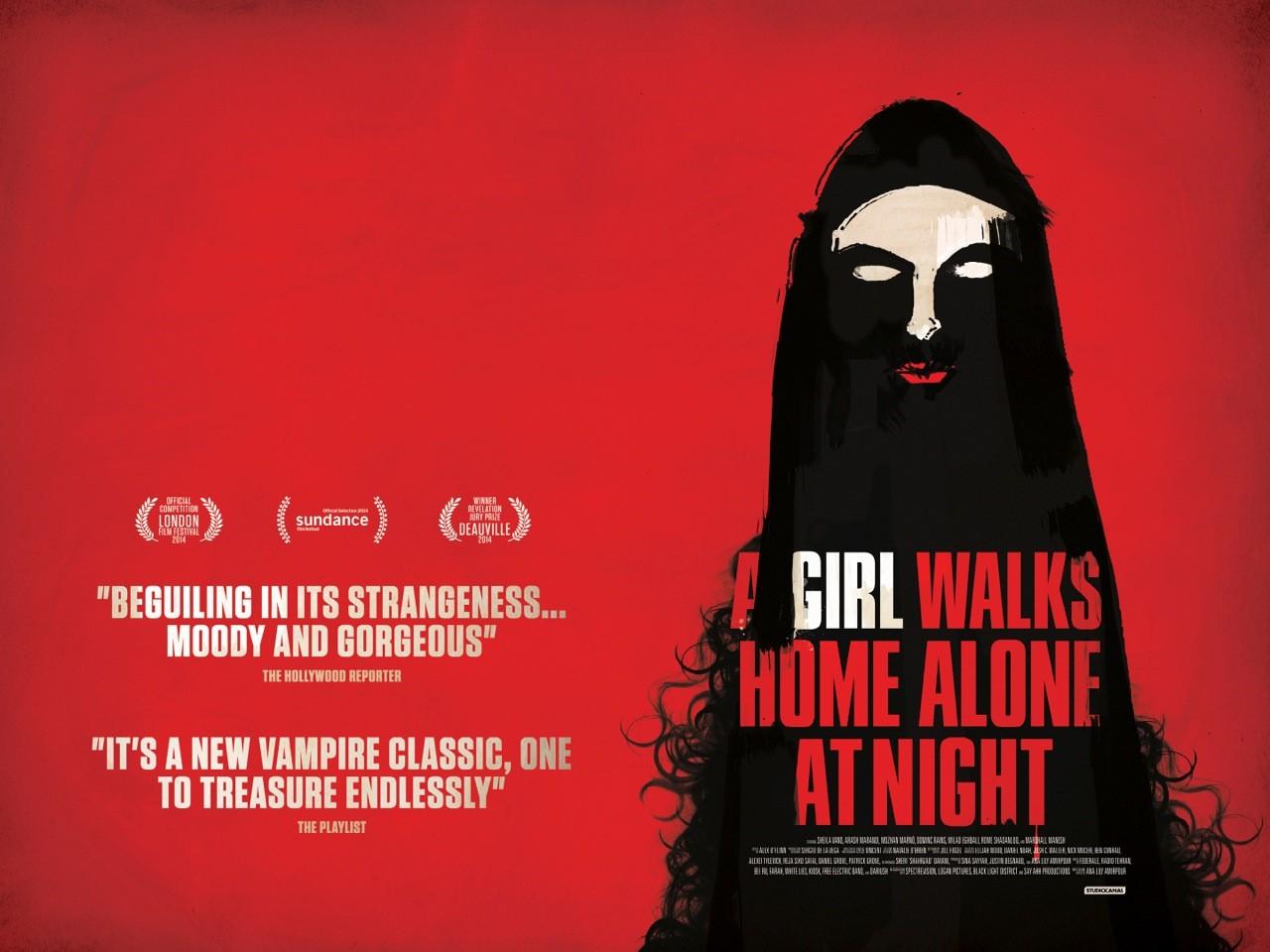 I’ll just flat-out start by saying this was probably the most highly original, inventive, and exciting film I’ve seen to have come along in a while. In fact, had it of come out last year, it wouldn’t most likely have, it would have, landed a coveted spot on my “best films of the year-end” list. What’s so interesting about this film is that it kind of came out of nowhere. In fact, I don’t even remember how I heard about it. Since I really don’t read any film news/review anymore that’s not where I took notice of it. I do however somewhat regularly look at cumulative scores and saw that this one was graded rather highly. Then I saw the name of the title and it piqued my interest. And merely based on that and that alone, plus seeing a tagline that it was “the first Iranian Vampire Western”, I thought to myself well at the very least this sounds interesting. What I “didn’t” know while watching it is that it’s an American film. Even though all of the characters in the film are Iranian actors who speak in the Persian language and it’s written and directed by an Iranian-American filmmaker Ana Lily Amirpour who has lived in America for practically her whole life. Which is ironic because the film feels totally foreign, and different from just about any other American film I’ve seen, bringing us into a poor desolate land known as “Bad City” which feels like a world far, far, away when in actuality it was shot right here in the States in Bakersfield, California.

The film opens with an old man, Hossein, a heroin addict who seems to be at the end of his rope in terms of his addiction. The only saving grace in his life is the assistance of his son, Arash, who is at his father’s beckoning call because like most sons (at least that I know) does just about anything to save his father. Anyways, Hossein owes quite a bit of money to the local town drug dealer, Saeed (whose look seems to be taken straight from Ninja of the rave/rap African group Die Antwoord). Saeed takes one of Hossein’s prize possessions much to the chagrin of Arash. Saeed seems to be the focus of the story, at least for about the first quarter of the film, along with his hooker, junkie, drug partner Atti. But one night Saeed happens to stumble across a young woman, called simply “The Girl”, that follows him to his apartment, which in that point in the story it shifts gears completely and this “girl” or young woman of whom I speak of becomes the central focus of the story. What’s even more notable is that said woman is a vampire, who goes around town wreaking havoc but does so with a conscience. She seems to only prey on the weak, sick, and degenerate members of society. It is by this chance encounter between the town drug dealer Saeed and the girl whom Arash crosses paths with, which involves the major subplot of the story, one that mirrors the one from “Let The Right One In” (2008) and the American version “Let Me In” (2010). But don’t be fooled, besides the reference, it’s undeniably unique enough (not to mention they’re adults and not children) to separate itself from those films. It is through their relationship that the rest of the story unfolds, and all of the characters previously mentioned are reintroduced back into (or out of, depending on how you want to look at it) the story.

As you can probably already tell by my comments at the beginning of my review I absolutely loved just about every aspect of this film. There is just so much I want to talk about that I feel like I would be doing it a great injustice to leave any of them out. But for the sake of not writing a novel, I will try to keep it to just the key elements of the film in which I really liked. First off was its stunning black-and-white cinematography. I’ve always thought a film is better when shot in black-and-white. As it takes the viewer away from the color palette and allows the images to speak for themselves. In this film this approach works brilliantly as it’s maybe the best looking black-and-white film since as far back as I can remember. This format also gives this chilling, noirish tale a look of authenticity that works perfectly given the content of the story. It’s also about as stylishly shot from a design angle and has a look and sometimes feel of an old Jim Jarmusch film (especially in the hipster department). The cool, sleek, and cold feel and tone matches the images on-screen magnificently. Another thing I think is important to point out, is that for a movie with this much style (Quentin Tarantino came to mind for me at times) it’s also loaded with substance. The central story and the many shifts in character arcs make it completely and utterly compelling from start to finish. There’s also a great “meta-ness” to the whole affair. While it certainly is a horror film at heart it also combines elements of film noir, westerns, comedy, drama, and romance. All genres that are balanced quite well considering how dense of a film it winds up being. The last thing I think that’s important to point out is that there is scene after scene of sheer beauty that seem like they have the potential to be iconic movie history (an example would be the dancing scene between John Travolta and Uma Thurman in “Pulp Fiction” (1995) – but imagine not just one but several scenes like that). Which had me looking up the screen with a shit eating grin for practically the entire film, so engaged by the style, story, and characters that I had to pass up a bathroom break in fear that I was going to miss whatever was next. This is hands down the most unique, stylish, and fresh take that breathes new life into what is otherwise a tired genre, that being the vampire film. It’s only two months into the year and this one has already secured a spot on my top 10 list of 2015.