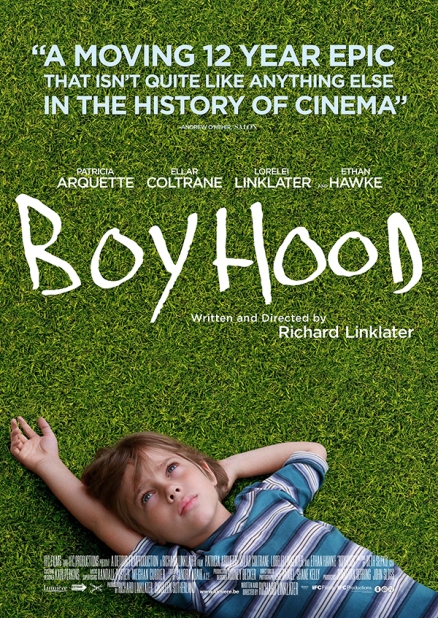 A home run for Richard Linklater, and one in which feels almost like a culmination piece within his body of work. Which makes sense considering the movie was shot over the span of 12 years. So like with any artist, Linklater most likely changed a lot himself as a director over that period of that time. Adding to the authenticity of the film. This is dense and thought provoking stuff. Watching this film I felt like I was watching myself as a boy “growing up” again, much like I did with ‘The Tree of Life’, which I also found myself making a lot of comparisons to. Except, instead of Terrence Malick’s loose, stream-of-consciousness narrative, Linklater takes a much different approach and shoots it in a linear fashion like a documentary in real time. So it almost feels as if you’re right there watching this young boy’s (played remarkably by Ellar Coltrane) life unfold before your eyes. One key aspect that I really liked about the film is that even though Linklater filmed it for a few weeks every summer over the course of 12 years, while watching it, it felt very seamless in the way time passed by. Not episodic which I was thankful for because I thought had it of been edited that way it would have detracted from the film. Another aspect I liked was that within every frame, for its entire 2 hour and 45 minute run time, there was something very intentional being portrayed. So it almost demanded your attention, asking you to do interpretive work constantly throughout, as almost every shot or scene made you think (and in a lot of cases feel) deeply. Lastly, I thought it did an exceptional job in terms of depicting all of the things we go through in adolescence. How we view the world and the changes that are constantly happening all around us, as we’re being pulled this way or that by different forces and having to choose between parents and their belief and value systems (with Ethan Hawke clearly being the representative for exploring this theme), all the while trying to develop your own sense of identity and individuality.
Featuring some beautiful cinematography shot all over Texas, a solid musical soundtrack (one that Linklater uses brilliantly to tip off the viewer as to what time period they’re in), and a standout performance by Patricia Arquette, who may receive some recognition come awards season for her strong work here (as well as Coltrane). This is almost guaranteed to garner a Best Picture nomination as well as a nod in the directing category for Linklater. Already up there vying with ‘Under The Skin’ for my favorite film of 2014 as well as Linklater’s best work behind the “Before” Trilogy films. This is one that comes with my highest stamp of approval. And as an added disclaimer, I can’t emphasize enough for you to make every effort to see it while it’s in theaters, as at home (like with most films) I can only imagine it being a much different experience.